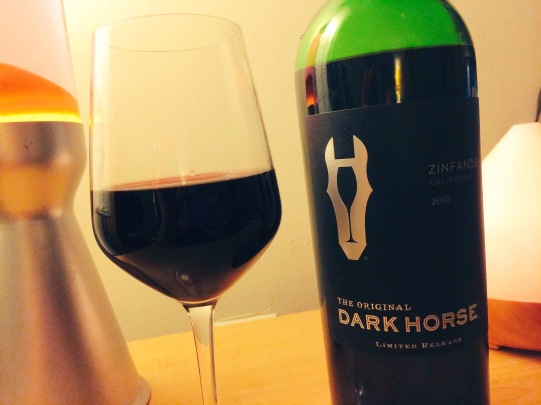 Like a dust devil of love notes, this Zinfandel has all the glorious taste of Friday night on the couch with a bowl of ravioli and old episodes of Bored To Death.

“Bored to death, plus expenses…”

I always had the hardest time deciphering the lyrics to the theme music so I looked them up.

Ok, but for realz, this is a very nice Zinfandel from Dark Horse.

Creamy and full of oak. Jammy with dark fruit, leather and spice. Oh yes, it’s all of those things plus 14.5% alcohol. I had three glasses and gave the stinky little dog a bath before the Xavier got home from work.

No headache but, on Saturday morning, I did kinda wish that I had stopped at two glasses. 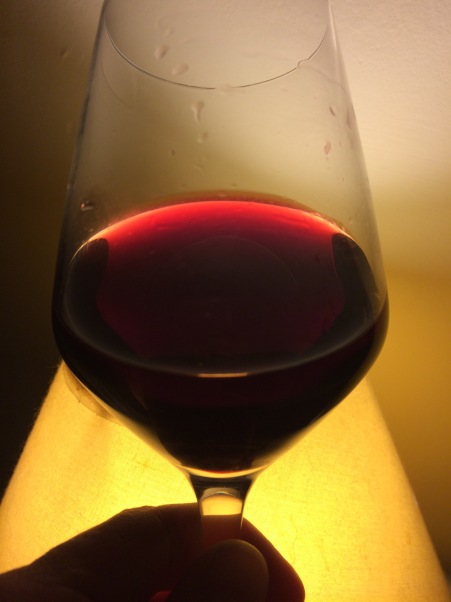 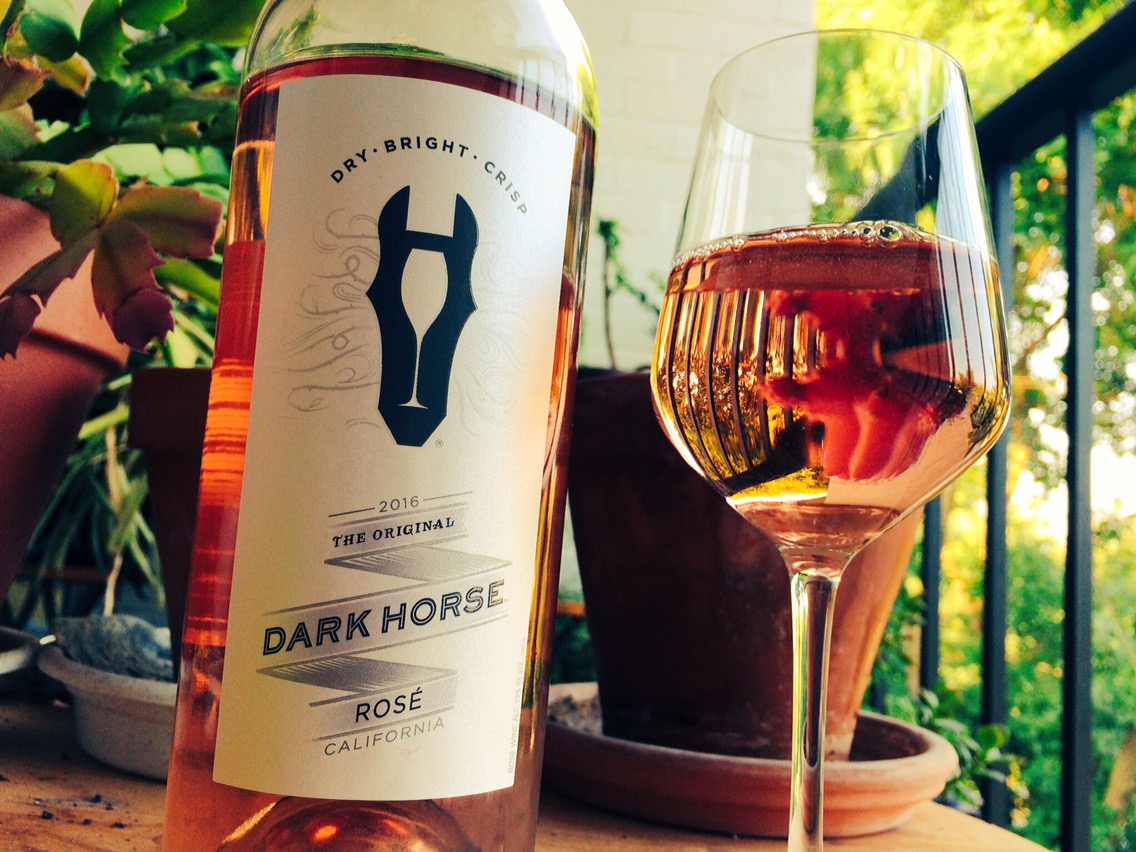 I keep trying to like Rose’ while also trying to be frugal.

Generally speaking, Rose’ and frugality don’t play well together, but this one’s not bad.

For $8.99, Dark Horse makes a Rose’ that maintains enough smooth and buttery qualities to make it perfectly drinkable.

Initially, a very bright and crisp wine, I noticed that it mellowed out considerably by the second day. I prefer second day Rose’ and it is excellent paired with a big spinach salad topped with Chipotle Ranch dressing. 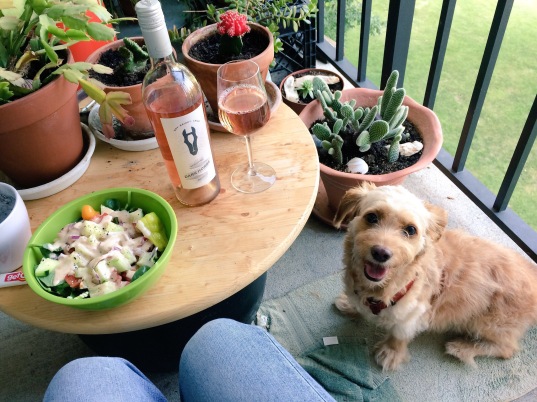 I call this my homework wine, for obvious reasons. 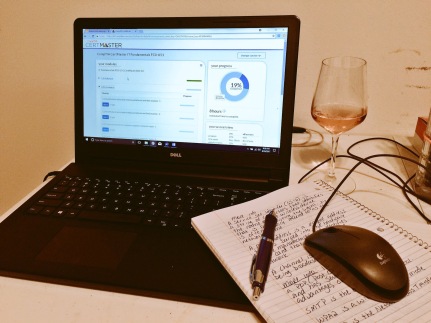 Smooth and easy sipping, a little Rose’ helps to drown out the residual bad music that eight hours of stapling idiocracy has left in my brain. Even now as I write this on a Saturday morning, snippets of the insufferably bad music played all day at work still rattle around in my head.

Right now it’s Rachel Platten. Now, let me warn you, I only share this link as a cruel joke. Misery loves company and I think that if I should have to live with the ghost of this horrifically bad song in my head then someone else should too.

Thank you for calling the suicide prevention hotline. Please enjoy the music while your party is reached. And by the time a representative finally picks up the phone, there is only dead silence on the other end.

So anyway, back to the wine. Xavier did not like this one at all so that just meant more for me, which is fine because I have a lot of homework. 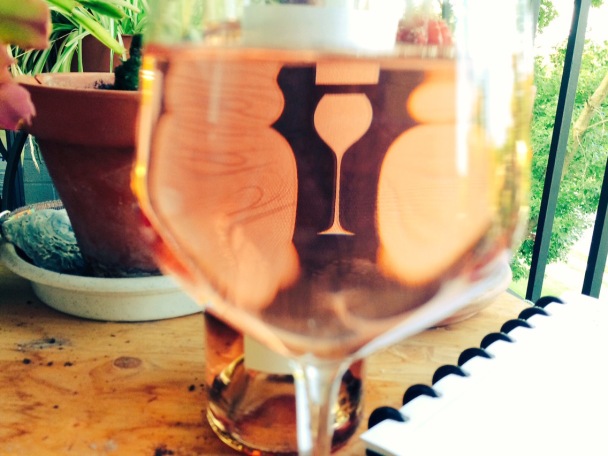 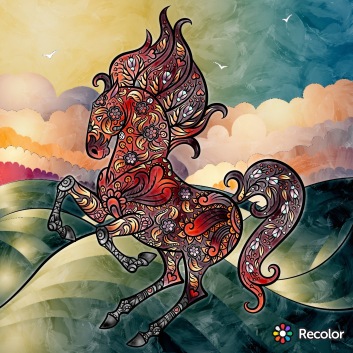 My friend, Kricket, says that she avoids California wine because she doesn’t like the way the ground tastes.

I’m not sure I can relate but let’s run with it anyway. Every time I’ve been to California it leaves me with a renewed light in my heart for New Mexico. Visiting California makes me glad to go home.

Some may argue that it smacks of Botox and carbon monoxide, I would suggest that the benefit to holding such an opinion is in being overheard expressing it by an impressionable fool.

Kricket is not a fool but she thinks what she thinks so I decided to conduct an experiment by trying a wine that is mostly not from California.

Still being on my Dark Horse kick, Big Red Blend was my choice for venturing out into the world of unfamiliar grapes. That’s right, foreign grapes in serious danger of being deported, were brought together in a harmonious blend proving that, despite the varying color of our grape skins, we can in fact all get along.  There is Spanish Tempranillo, Chilean Cab, and Argentinean Malbec in this mix. Coupled with Merlot, Syrah, and Petite Verdot, Dark Horse Big Red Blend is a tall glass of feisty wine ready to pair up with any meal.

We had it with salmon burgers and giant heaps of steamed broccoli. 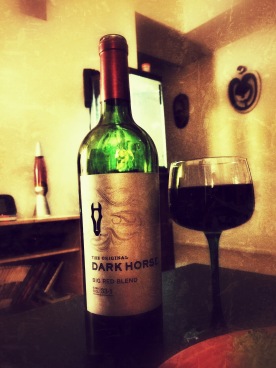 I enjoyed the Big Red Blend.  It’s a little bolder than the Pinot Noir (which is my reigning favorite) but still has an enjoyable flavor once you figure out how to drink it.

Xavier and I used our round glasses with the green stems. We bought them at Goodwill for the purpose of enjoying a cold glass of Moscato on the patio during the hot and steamy summer nights here in Easterville. To me, they vaguely resemble cacti and are tacky for sure but they are not the right shape for optimizing a bold red wine.

What I mean by that is if you allow this wine to splash up into the ceiling of your mouth it delivers a bit of an upper cut to the upper pallet. This is really easy to do in a glass of this shape.  If you use a glass with a more narrow opening, it facilitates taking a sip as opposed to a swig.  In this instance, the Big Red Blend goes down smooth like butter.

When asked what he thought of it, Xavier said, “It is reminiscent of DayQuil but if you bought it again I would still drink it.”

Hey, I can’t control what the Hubz says but I thought it was pretty good and never once considered using it as a substitute for cold medicine. As for whether or not it tastes “un-Californian”, I honestly couldn’t say but I would certainly buy it again and would be happy if I went to a party where it was being served. 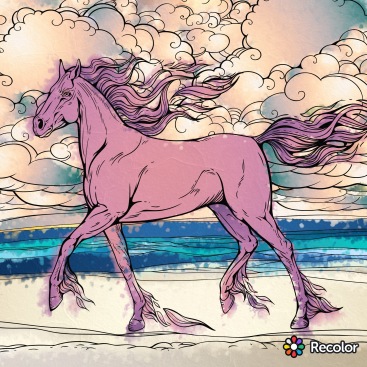 I’m not sure what they mean by “jammy” but if it means chunks of grape residue stuck to the inside of the bottle and settled at the bottom of my glass then, yes, it’s “jammy”.

Penguin-mouth factor? Low, it did not turn my teeth blue. 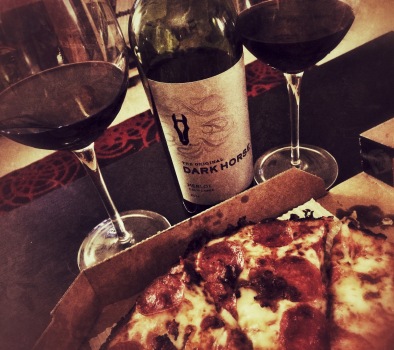 I would describe Dark Horse Merlot as a lightweight Merlot.  Not that it’s intended for amateurs but that it’s not as heavy feeling and flavored as other Merlot wines that I’ve sampled. As previously mentioned, it did not give me penguin mouth. Additionally, it didn’t give me a headache either.

Am I supposed to be using terms with universally agreed upon definitions?

It’s a little dark-fruity, a little oaky and, if you squint real hard, maybe a vague notion of molasses. Honestly though, “molasses” is a bit of a stretch.

I am rapidly becoming a fan of Dark Horse wine and, possessing a certain proclivity for being a creature of habit, would probably resort to buying it all the time except for the certain inevitability of running out of stuff to write about.

But not to worry. I’m not in panic mode, yet. There are still a few Dark Horses yet to be explored and, for a wine that continues to be on sale for $8.99, you can’t go wrong here. 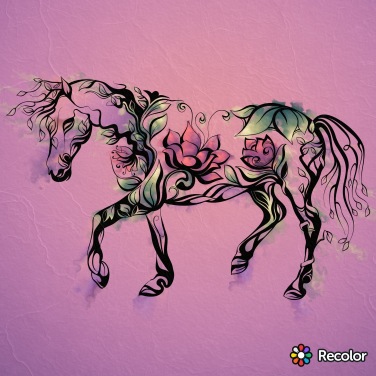 Always a sucker for cool names and labels, I just had to try some wine from Dark Horse.

While this method of selecting wine frequently does not work out in my favor, this time I got lucky.

After doing some research on their website, I decided to try the Pinot Noir and it did not disappoint! 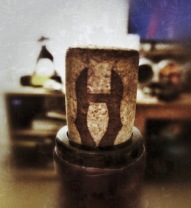 This is a velvety smooth and creamy Pinot Noir that actually does bring to mind rose petals and lavender, cherry and just the right amount of oak. (Y’all know I wouldn’t normally say something like that, right?) Give it 30 minutes or so to breathe and get ready to be impressed.

Xavier and I both got home late on this evening, didn’t much feel like cooking, and we paired this wine with popcorn which is not proper or sophisticated but is the reality of real people out there in the real world. 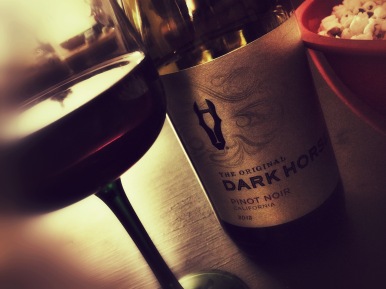 I think the wine did more for the popcorn than the popcorn did for the wine but in any case we were out of both by the end of the night.

It is not the recommendation of this author for two people to kill entire bottles of wine in one sitting but, you know, sometimes shit happens.  Let’s call it a science experiment.

Here are some other relevant facts.

For those of you who fear the dreaded red wine headache, after three hefty glasses of Dark Horse Pinot Noir I slept like a (comatose) baby and woke up with no headache or hangover. In my personal experience, I have found that higher quality red wines do not give me the ice-pick-through-the-temple, while lesser quality wines leave me reeling from what feels like an open head wound.

For me, taste and headache factor are the measure of money well spent.

Speaking of money, Dark Horse wine is very reasonably priced. I think I paid $8.50 for this bottle. Normally I would consider that a big yellow CAUTION flag but their website claims that renegade wine maker, Beth Liston, has mastered the method of producing top quality wine at affordable prices.

All I can say is: Claim Substantiated.