They only produce two varietals: Cabernet Sauvignon and Zinfandel. I tried the Cab over the summer and it was stupendous so naturally, when the Zinfandel appeared on the shelf, I had to to bring it home.

This is a deep, dark, complex Zin that will make you fill your glass more than once. It’s also 14.5% alcohol so hallucinations are possible, likely even.

Chocolate, vanilla, oak, toasted almond (and grapes, don’t forget grapes) this wine is sooo good, I literally did not care that I was seeing double and probably slurring my words while attempting to maintain an intelligent conversation with our house guest.

Carnivor Zinfandel is $12.99 and worth every penny. My advice: buy two.

Unrelated side note: This afternoon Xavier and I took a field trip to Total Wine in Leesburg, VA. I’ve never been to a Total Wine before and now I see what all the fuss is about. Total Wine is the most dangerous store ever…ever.

With unprecedented restraint, we left with only four bottles and, as a special bonus, we found a super cool abandoned house on the way home! 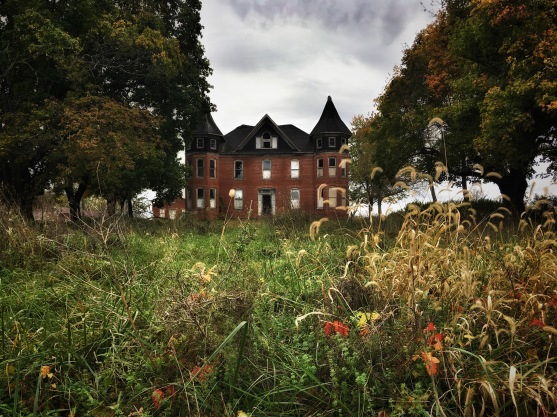 I REALLY wanted to get closer to this house but the fence with the big No Trespassing sign advised against it.

This summer, I began a journey to earn a college degree and to embark on a more lucrative career because this little piggy wants more money.

To start things off I took Intermediate Algebra, which is not a particularly advanced level math class but considering that the last math class I took was in 1994, it proved to be very challenging. I also took College Writing but I can do that shit in my sleep so there was considerably less drama involved.

Anyway, this math class was kicking my ass and there were many times when I contemplated walking away from the whole ordeal.

Unfortunately (or probably fortunately) the voices in my head are super mean.

So instead of quitting, I spent every last waking moment logged into ALEKS.com forcing myself to learn some math while Xavier crept around the apartment trying not to make a peep and watching TV with headphones on. He made me dinner every night and encouraged me to try one more time every time I would throw down my pencil and say, “Math is stupid!” (because clearly it was the math’s fault that math was stupid)

Anyway, ten days before the midterm exam deadline, I was two modules behind in the class. This is not a good position to be in because at that point I should’ve been able to spend the next week reviewing all the material instead of scrambling just to get caught up.

I really wanted to quit.

But I still didn’t.

I buckled down, got up early and stayed up late, and went nose to the grindstone even harder so that by the day of the exam I was caught up.

Still, I was very anxious about the outcome.

So that morning, I meditated, did Tai Chi, worked some other voodoo, and went to the testing center.

And then the most amazing thing happened.

Damn right I did.

I bet you’re wondering about the wine.

To celebrate this momentous occasion, I brought home a bottle of Carnivor Cabernet Sauvignon.

I’ve read wine reviews that use words like “leather”, but I always thought they were just making stuff up. I’ve never had any wine that tasted like leather.

You know when you walk into the Overland Sheepskin Co. and are enveloped in the delicious smell of fine leather that can only mean the cheapest thing in the store is $400?

Carnivor Cabernet Sauvignon is a super smooth wine that tastes like caramel and the smell of fine leather. It is inky black, even under the light, rich and excellent.

I haven’t always liked every Cabernet Sauvignon that I’ve tried but this one is tasty and smooth, an excellent reward for defeating the numbers. 😉