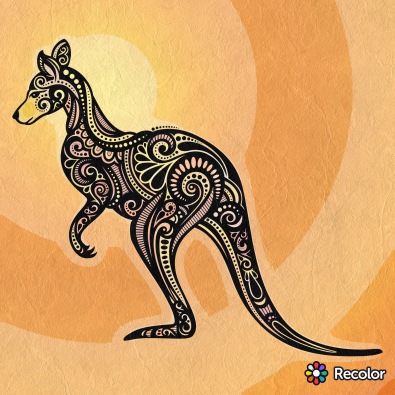 I may have gotten a little carried away with the [ yellow tail ] wine this week. 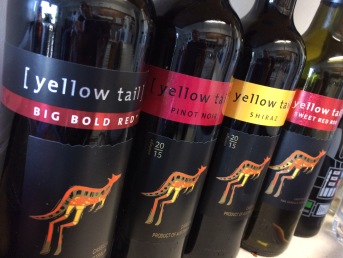 Unlike Sweet Red Roo, the Shiraz has a cork and a vintage.

We had it with baked salmon and vegetables but then we were still hungry so the rest of the bottle disappeared along with a bag of blue corn tortilla chips and salsa.

Xavier and I don’t own a dining room table so we eat at the coffee table. When the food appears so do the animals. The funny thing is that the dog wants the broccoli and the cat wants the wine. Neither of them is very concerned about the baked salmon. 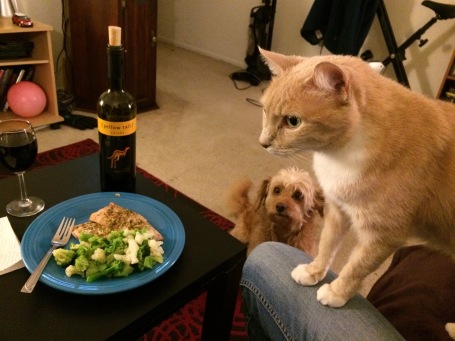 For those of you who aren’t aware, Shiraz and Syrah are made from the exact same grape.

So why the different names?

Despite being made from the same grape, the final product is very different. Shiraz and Syrah have distinctly different flavors that are accounted for by a wide variety of climate and soil conditions along with different fermentation processes.

Syrah often comes from France and is considered to be more refined and sophisticated while Shiraz comes from everywhere else and is generally thought of as being more crass.

Crass, that was Xavier’s word.

“You mean it swears in public?”, I asked.

“I mean it hits the top of my mouth like a mushroom cloud”, he replied.

Well, that’s one way to put it.

This wine does open with an upper cut to the upper pallet but then diffuses to a softer finish.

Is it exceptional? No, but it’s alright and didn’t give me a headache. I’d drink it again.