Sofia is Francis Ford Coppola’s daughter and she now has her very own line of pink wine with her name on it. Lucky her.

I had no idea that Francis Ford Coppola had time to stomp grapes in between all the gangster flicks but apparently he is a skilled multitask-er, which means that he himself does no actual wine making but that’s cool and all so long as whoever does the actual work gets paid actual money.

I say the verdict is still out as to whether or not I like this wine, though I’m leaning towards the latter. Xavier tapped out after the first glass leaving me to ponder the rest of the bottle.  His exact words were “It punched me in the jaw with tartness. I don’t think I’m going to have a 2nd glass.”

It is indeed a tart wine.  I believe the grapes were fed a steady diet of vinegar and Warheads sour candy, which caused insanity and birth defects, but the glowing pink color is just enticing enough to make you think it’s good.

That doesn’t mean it’s not good but it’s out there in a no-man’s land of foreign flavors. Not bold enough to be red and it’s not sweet or crisp enough to be Moscato.

Yes, of course, the Rose’ of The Godfather’s daughter no less. This poor girl has her name plastered all over the bottle and now everyone is blaming her for leaving them puckered and bug-eyed.

I’ve long made a practice of selecting wine based on the color of the juice and the appearance of the label and, while this often doesn’t work out in my favor, I can say…

My cat likes it. 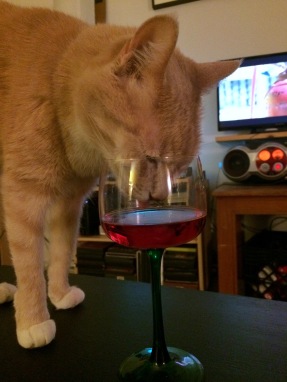