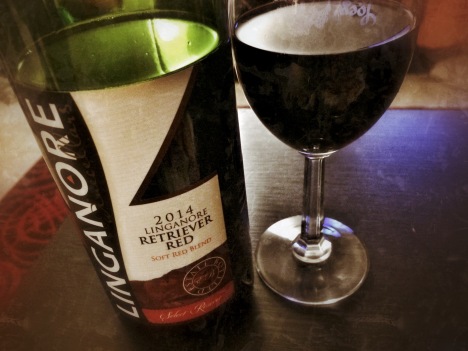 Many moons ago, Xavier took a field trip to Linganore Winecellars in Mt. Airy for a wine tasting.  My favorite dry red was the Chambourcin.

In the meantime, we’ve gotten pretty hooked on the various Red Blends that are out there, especially the ones claiming to be “soft”.

Linganore Winecellars has an excellent soft red blend called Retriever Red featuring none other than my favorite Chambourcin mixed with Cab.

I could drink this wine all night (and I did)  The Chambourin influence is very noticeable with the whole fruity, vanilla, woody oak, smooth finish thang coming through loud and clear.

Retriever Red is a terrific wine to pair up with pretty much anything or just put a straw in the bottle and call it a night.

No nasty revenge headache and I would be confident to serve this at a party or to send a bottle to my mom as a gift. 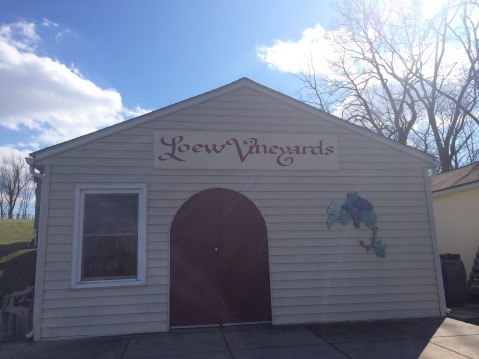 A couple weeks ago we took a little field trip out to Loew Vinyards in Mt. Airy, MD. Like many of the local vineyards in our area, Loew is a small, family owned, business. They are listed on Frederick Wine Trail along with two of our other favorites: Linganore and Elk Run. 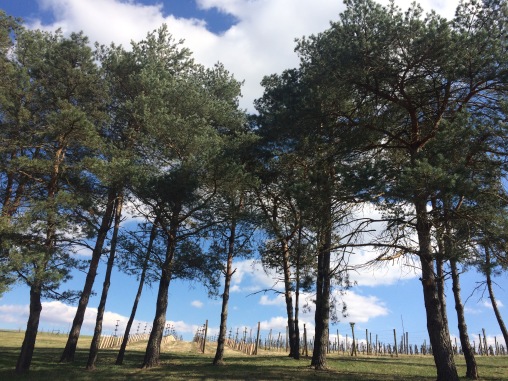 A general wine tasting at Loew Vinyards is only $7.00 and that includes going home with a “free” set of wine glasses.  🙂

The fact of the matter is that it’s awkward and rude to be taking cell phone photos during a wine tasting when the owner is talking about all the interesting facts pertaining to their various varietals. It’s rude so I don’t do it but I did save the tasting menu and took a photo of it later.

Believe it or not, Xavier and I don’t agree on every single thing in the whole world.

My three favorites (in order of appearance) were the Harvest Red, Country Classic and Viva Vidal.

He liked the Honey & Grape, Strawberry Jubilee and Viva Vidal.

So we bought the one we both agreed on.

That being said, I have to say that I thought the Harvest Red was very good. To me, it was smooth like a straight line. Naturally, it was also the most expensive bottle on the menu. Xavier said that he thought it tasted sour. While I honestly have no idea what he’s talking about, this is not an unusual difference of opinion for us.

While tasting the Serendipity, the bar tender mentioned that some previous patrons had thought it tasted like grapefruit.

And after a moment of crickets and tumbleweeds, she got the joke and we had a nice laugh.

Thank you, I’ll be here all night.

So anyway, about the Viva Vidal.

We came to a unanimous agreement that it literally tastes like a grape Blow-Pop. I am not misusing the word literal in a figurative expression. This wine is blow pop in a bottle.

While Viva Vidal does indeed taste like candy, it manages to avoid going into the land of nauseatingly sweet. I don’t know how they pull it off because this wine is quite sweet but I thought it was perfectly fine to have with dinner.

A word of caution: just because it tastes like candy doesn’t mean it won’t knock you on your booty. Vival Vidal is 12% alcohol so be sure to sip responsibly.

On February 19th, Xavier and I celebrated our 1st wedding anniversary by visiting Orchid Cellar Meadery & Winery for a tasting followed by a drive around Harper’s Ferry to look for cool abandoned houses and later in the evening we had an outstanding dinner at Clyde’s Tower Oaks Lodge in Germantown.

Mead is a peculiar substance that lays somewhere on the spectrum between wine and bourbon.  It is made from honey and generally weighs in at around 17% alcohol.  A little bit of Meade goes a long way.

Orchid Cellar Meadery & Winery charges only $7 for a general tasting and they let you keep the glass! 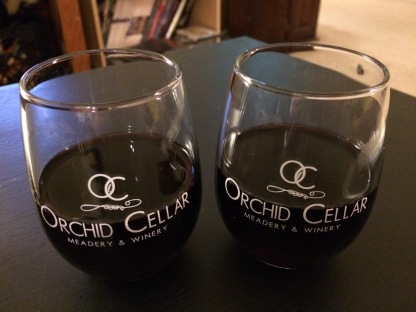 On the menu is an impressive selection of handcrafted Mead, wine, and honey wine. I can guarantee that you won’t be tasting anything like this anywhere else.

The honey brings a unique flavor that may seem foreign at first but it doesn’t take long to go from, “Oh, this is different.” to “Why is my glass empty?!?!”

For more information on the finer points of Mead and how it differs from wine, I highly recommend reading their FAQ page.

This wonderfully decrepit barn is just down the road from Orchid Cellar.

When I lived in New Mexico, I would never be satisfied with photographing abandoned houses from the side of the road.  I would be all up in there, risking my life climbing stairs that would were barely standing and tromping over dead animals and piles of rat poo to take a good look around and to get the best photos.

In this part of the country, many of these houses are inhabited by vagrants and/or surrounded by No Trespassing signs and, more often than not, there is an overly protective neighbor within eye shot who has already written down your license plate number. Ergo, it is necessary to exhibit a bit more restraint when photographing abandoned houses in the east.

This house is a perfect example of what I’m talking about. I stayed at the fence but I could totally see some awesome stuff through that broken window. Sadly, no way to get the shot from so far away.

This house, on the other hand, had no fence and was conveniently missing the front door. There was a No Trespassing sign nailed to a tree but I didn’t actually go inside and was speedy like The Flash so no photographers were shot during the creation of these images.

Everyone knows it’s bad feng shui for the front door to open onto a staircase and the maleficence oozing from the walls of this house will condensate on your face if you stand there too long. Whatever is in the room at the top of the stairs is just barely contained behind that sorry excuse for a door. Trust me, I know about these things.

This Sunday’s field trip was to Elk Run Vineyards and Winery in Mt. Airy, MD.

Elk Run is much smaller than the previous two wineries Xavier and I have visited.  It is privately owned and operated and the owners live in a normal house at the other end of the driveway. The tasting room is unpretentious in every way; small and cozy and inhabited by an elderly gray cat.

On the surface nothing is fancy.

Until they pour the wine.

Thriving on a diet of magic dirt and unicorn tears, these are some exuberantly happy grapes. “That is fer-damn delicious.”, I said to Xavier while tasting the Cabernet Franc and the bartender let out a little involuntary snort.

We did the general tasting, which is six pre-selected wines for $6 per person.

The thing about a wine tasting is that it seems like just a few harmless sips but by the 6th taste the grapes have started talking and I ordered a glass of Cabernet Franc while engaging our friendly bartender in what she must have thought was a ridiculous conversation comparing the economic efficiency of a custom built tiny house VS. buying a less tiny manufactured home and tested her vast knowledge of viniculture with thoughtful and intelligent questions such as “How long does a grape vine live?”

Of the six wines that were served, there were three that I was particularly taken with: Pinot Gris, Cabernet Franc and Sweet Katherine. I could be perfectly happy drinking those three wines for the rest of forever but, if I had to pick just one, it would be the Cabernet Franc.

Made with grapes grown in their Cold Friday Vineyard, the Cabernet Franc is a tall glass of deep red silk.  Identifying all the subtle flavors could take time, lasting well into the dark hours of the night, so I recommend saving this bottle for an evening when you’ve got nowhere to be and can sleep-in the next morning.

They say the Cabernet Franc tastes of German Chocolate cake, ripe olives and black pepper, which I absolutely don’t recommend eating on the same plate, but when the subtleties of the flavors come together in the alchemy of a wine barrel the end result is impressive to say the least.

My recommendation: Have another glass. 🙂

On the way to Elk Run, we drove through Libertytown; home of many photo-worthy abandoned houses. A word to wise, be mindful of barriers like fences and No Trespassing signs. Gun-happy residents are often living nearby.

“It has a looonnnnggg buttery finish”. The bartender pursed her lips while making a socket puppet shape with her hand.

I would feel like an idiot saying that, with accompanying gesticulation, but what I will say is that if grapes and butter had a baby, it would be this wine. 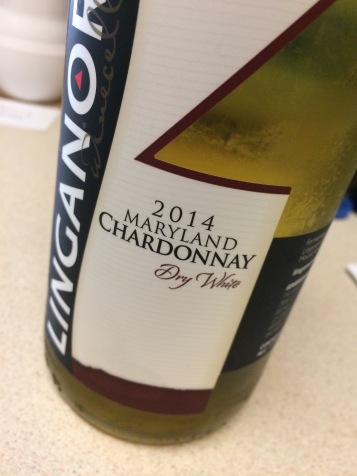 Xavier and I drove out for a visit this past Sunday. We wanted to taste the dry wine list; specifically looking for a Chardonnay and a Cabernet-esque dry red.

I wanted to like the one called White Raven because the name is cool, and I expected to like the Chardonnay Reserve 2015 because it’s expensive. Neither of these things came to pass.

Apparently cool names and high prices do not necessarily mean better. As far as I’m concerned they hit us with their best shot right out of the gate. The Chardonnay 2014 is everything they claim it to be.  It has zero percent residual sugar and is quite literally smooth like butta’, which makes it deliciously dangerous because it is also 11.5% alcohol.

We bought a bottle and, at check out, they asked if we would like for them to open it for us so we could enjoy it there.  I said, “Only if we can stay the night.”

Pro tip: If you put a straw in the bottle, you can claim to have had “only one drink.”

I specialize in making nice places look like run down abandoned buildings but Linganore Winecellars is, in fact, quite lovely.

Lucky for me, the weather was cold and there were not many people milling around outside but, inside on a Sunday afternoon, the scene is warm and bustling with thirsty wine connoisseurs.

As previously mentioned, I was looking for a Chardonnay and a dry red. We didn’t buy a red but the one I liked the most was the Chambourcin. It’s very dry, with zero percent residual sugar, super smooth, pleasantly oaky, and likely the topic of a separate blog post. 🙂