“We’ll not be given time to create, we be asked to create in real time.”

Two years ago, I fled to the Sky Island Mountains to seek shelter from the turmoil and recharge my soul under the blazing sky.

In retrospect, that is why all of us were there. Why so many would travel from so far to meet on the mountain in the name of finding the flow.

Some said it was a cult, and they were probably right, but we went anyway.

Nothing was good on the day I left and I drove for a very long time.

What happened next changed everything in an instant. The lights came on and it was time to start over.

Xavier was standing on the porch at the end of the road to Oracle.

Accusations were made and some said it was contrived.

With more unlikely details than I could possibly arrange, somethings fall outside my scope of practice and this was one of them.

But even if it was, contrived that is, I say “what of it?” and advise the inquisition to walk away peacefully while they still can.

Two years ago in a flurry of fear and hurt and desperation, I went to a retreat to study Tai Chi and drink wine with my friends.

Instead, I met a boy and we played push hands and fell in love on the couch.

We’re married now but getting married was easy. Easy compared to the force of nature it took to bring us together and break us free.

The wedding was nice but this was the day of creation.

No, sometimes they don’t work out at all.

And, sometimes, it seems heartbreaking.

Things were not as I thought I wanted them to be.

As it turns out, I thought wrong… 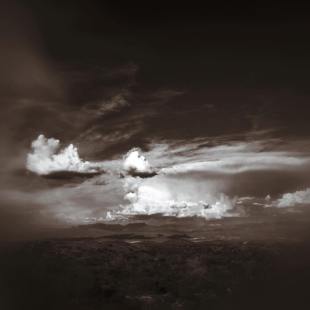 Once upon a time on a mountain in the sky,
Arizona burned bright with flames a mile high.

It waited while a boy stood at the crossroads, asking for a sign.
Caught in a fluorescent bath of indecision, he looked at his watch, he looked back at his car, he looked at the suitcase by his feet.
It should be so easy, just get on the plane.
“I prefer to be in the plane”, he thought to himself, but his feet still didn’t move.
He thought of his dream, turbulence in crossing the Mississippi River.
A blaze of glory with a sudden stop.
Going down in flames to die a proverbial death.
Something’s gotta give.

He stood in the parking garage and considered his other dreams…

Once upon a time on a mountain in the sky,
with thorny arms and hot breath,
Arizona changed his mind.

“You don’t have to take your life at face value”, he would breath in the words from her mouth as she said it to him later, though he heard it then.
He tried to reach out and grasp the glow of her heat but it was on him already.
In him already.
Compelled his thoughts.
Already.

He didn’t know what he knew while he stood at the corner of uncertainty, not exactly, but a spider moved in it’s web and the wind stirred the surface of the water.

Once upon a time on a mountain in the sky,
a silent creature in Arizona waited with unblinking eyes.
Warm sand against it’s belly, in the shadow of a tree.
Without worry.
Patiently.

Xavier locked his car and picked up his suitcase, this is what fate feels like.
It was time to go.
Home.