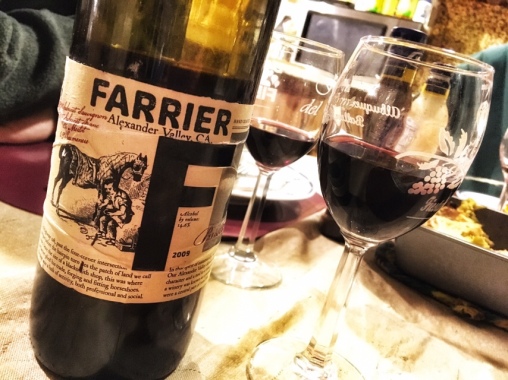 Xavier and I had dinner next door at my dad’s house last night and, as a surprise, he breaks out this bottle of 2009 Farrier Presshouse Red. He says he received it as a gift, no doubt because of the name “Farrier”. My dad has been known to do things to a horse’s feet from time to time.

I had never heard of the Farrier Wine Co. and didn’t necessarily have high expectations.  As it turns out, Presshouse Red is surprisingly good. It reminds me of Bogle Essential Red, which is one of my all time favorites.

Presshouse Red is a blend of Cabernet Sauvignon, Cabernet Franc, Carmenere, and Merlot. A smooth drinking wine with black currants, mocha and exceptionally well balanced acidity; I thought it was terrific.

Xavier said it tasted like vinegar and then proceeded to kill half a bottle of Chivas Regal scotch with my dad. That’s fine because, while they were having man drinks, I had the Presshouse Red all to myself.

Other pertinent facts: 14.6% alcohol, no headache.

Sadly, I’m pretty sure the Farrier Wine Company is out of business. When I tried to visit their website I ended up on what appeared to be a WordPress Blog written in Korean. If you happen to see a bottle of 2009 Presshouse Red for sale, buy it because it’s probably the last of it’s kind.

A peek into Megha's mind