This summer, I began a journey to earn a college degree and to embark on a more lucrative career because this little piggy wants more money.

To start things off I took Intermediate Algebra, which is not a particularly advanced level math class but considering that the last math class I took was in 1994, it proved to be very challenging. I also took College Writing but I can do that shit in my sleep so there was considerably less drama involved.

Anyway, this math class was kicking my ass and there were many times when I contemplated walking away from the whole ordeal.

Unfortunately (or probably fortunately) the voices in my head are super mean.

So instead of quitting, I spent every last waking moment logged into ALEKS.com forcing myself to learn some math while Xavier crept around the apartment trying not to make a peep and watching TV with headphones on. He made me dinner every night and encouraged me to try one more time every time I would throw down my pencil and say, “Math is stupid!” (because clearly it was the math’s fault that math was stupid)

Anyway, ten days before the midterm exam deadline, I was two modules behind in the class. This is not a good position to be in because at that point I should’ve been able to spend the next week reviewing all the material instead of scrambling just to get caught up.

I really wanted to quit.

But I still didn’t.

I buckled down, got up early and stayed up late, and went nose to the grindstone even harder so that by the day of the exam I was caught up.

Still, I was very anxious about the outcome.

So that morning, I meditated, did Tai Chi, worked some other voodoo, and went to the testing center.

And then the most amazing thing happened.

Damn right I did.

I bet you’re wondering about the wine.

To celebrate this momentous occasion, I brought home a bottle of Carnivor Cabernet Sauvignon.

I’ve read wine reviews that use words like “leather”, but I always thought they were just making stuff up. I’ve never had any wine that tasted like leather.

You know when you walk into the Overland Sheepskin Co. and are enveloped in the delicious smell of fine leather that can only mean the cheapest thing in the store is $400?

Carnivor Cabernet Sauvignon is a super smooth wine that tastes like caramel and the smell of fine leather. It is inky black, even under the light, rich and excellent.

I haven’t always liked every Cabernet Sauvignon that I’ve tried but this one is tasty and smooth, an excellent reward for defeating the numbers. 😉 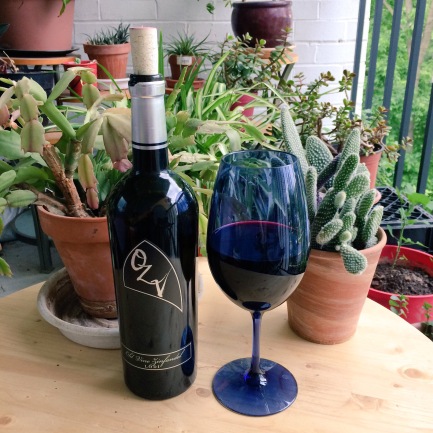 The problem is that, with a few exceptions, they all have the same stuff. Every store store carries the usual suspects when it comes to wine. They all have Cupcake and Black Box, Menage A’ Trois, Dark Horse, and Beringer. You know, the brands I usually review.

Stores like Trader Joe’s are renowned for their excellent, yet inexpensive, wine selection but Trader Joe’s is not allowed to sell packaged liquor in the state of Maryland. On this weekend, Xavier and I decided to take a field trip to Trader Joe’s in Virginia to see what all the wine-fuss was about.

We bought two bottles. One was a Sauvignon Blanc with an alluring description but that turned out to be pretty bad. (or maybe I just don’t like Sauvignon Blanc). The other was this bottle of Old Vine Zinfandel from Old Zin Vines. At $10.99 it was on the more expensive end of the Trader Joe’s price spectrum but absolutely worth every penny and the two hour round trip. For the time invested, I wish we had bought more than one bottle. 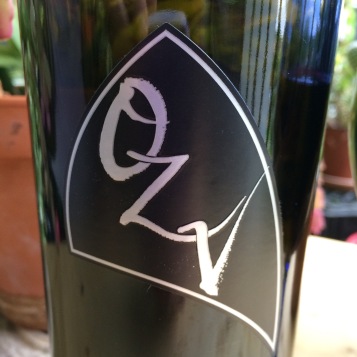 Visitors to the website OldZinVines.com will see that it is a brand owned and operated by Oak Ridge Winery.  Incidentally, Oak Ridge Winery is also the creator of one of my other favorite wines, Old Soul Pinot Noir.

Old Zin Vines Zinfandel is, without a doubt, one of the best wines I have tried. It is fer-damn delicious and everything on the label is true, which is unusual to say the least.

This jammy elixir of raspberry, milk chocolate and mocha is silky smooth and disappears very quickly.  Like being overwhelmed by the cuteness of a kitten, it is not even fair how good this wine is.

If you too have driven over an hour to get to Trader Joe’s, don’t sell yourself short by coming home with only one bottle of Old Zin Vines Zinfandel. 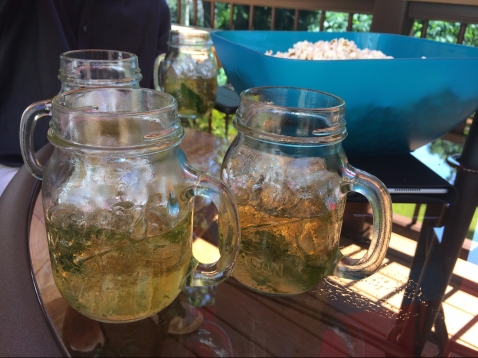 Our Tai Chi friends invited us over for drinks last Sunday, so obviously we accepted.

They wanted to have a Mint Julep party and, even though I worked as a bartender in Las Vegas for three years, I managed never to make or drink one of these fancy concoctions so naturally I had to learn all about it.

The first step in making an excellent Mint Julep is to grab a handful of fresh mint from the garden. 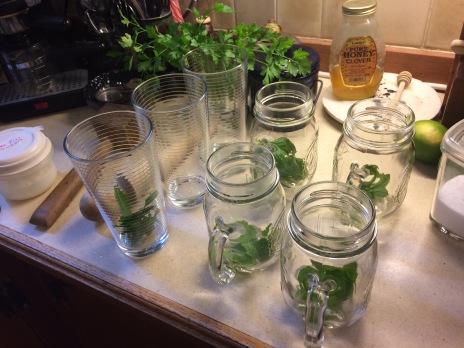 Next, add several ice cubes and one shot of Bourbon. Maker’s Mark is a nice choice. 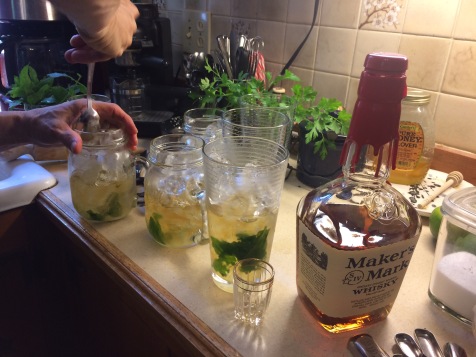 This is a southern style Mint Julep so do not add any additional water. I suppose if you had a stainless steel drink shaker you could actually do all of this in the shaker, and then shake to facilitate the melting of the ice before pouring the whole thing into a glass but, in the absence of a shaker, mixing it directly in the glass is fine too. The melting ice becomes the water that dilutes the bourbon so it takes longer to end up face down on the table.

Mint Juleps are a commodity of a hot summer afternoon so enjoy slowly. 🙂 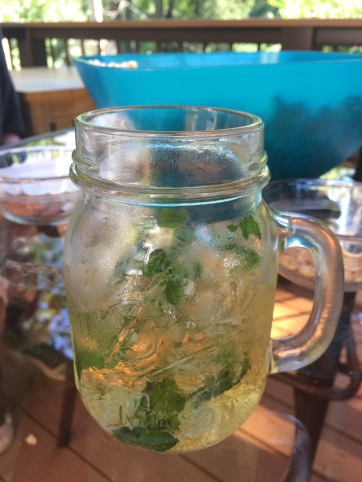 As a post script, our Tai Chi friends also have a flock of Guinea Fowl to make sure that they never over sleep… ever.

Yesterday, after wrapping up a fun shopping trip for cactus and gardening supplies at Lowe’s, Xavier says, “Hey, we’re really close to the Frederick Wine Ho”, which is husband-speak for, “I want to go there and buy stuff”, so we did.

Anyway, a while back we were there to fetch some Cabernet Sauvignon from the Devil’s Locker but, upon entering the store, wine magnets moved my feet in a bee-line to this enchanting bottle of Old Soul Pinot Noir.  I didn’t get it that day but I kept it in the memory banks for future reference.

Old Soul Vineyards is actually a sub-brand of a larger company known as Oak Ridge Winery. If you scroll down on this page https://shoporw.vintegrate.com/  you can see all of their brands.

Fun fact: A few weeks ago, Xavier and I took a little road trip out to Trader Joe’s in Reston, VA specifically for the purpose of perusing their wine selection. On that trip we found what turned out to be an excellent Lodi based Zinfandel from Old Vine Zin. A bit of research revealed that Old Vine Zin is also a sub-brand of Oak Ridge Winery. 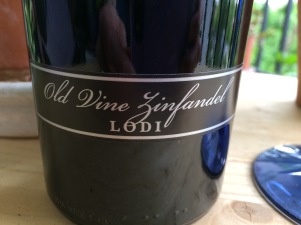 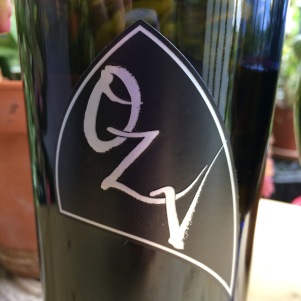 Old Vine Zin (Old Zin Vine?) will be a post for another day but, sufficed to say, the bottle didn’t last long.

Back to the Old Soul Pinot Noir, which is positively excellent, and not just because of the groovy label…

If dark chocolate and an oak tree got drunk on espresso and had a baby, it would be this wine. Boasting a prominent oak flavor (not unlike Red Velvet from Cupcake) and slightly bitter, though very pleasant, tones of dark chocolate and espresso, this is the kind of wine that makes me want to put a straw in the bottle and refer to the whole thing as “one drink”.  As in, “What?? I only had ONE drink…”

For best results, enjoy by candlelight by the patio on a hot summer evening.

This is not really part of the wine review but these are the new cacti mentioned at the beginning of this post. 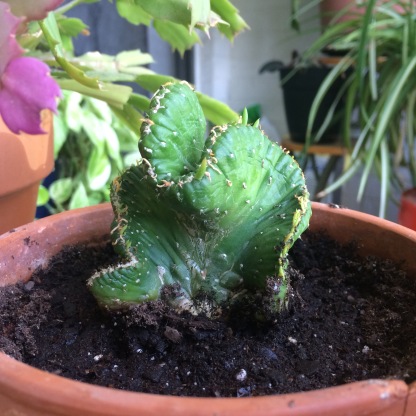 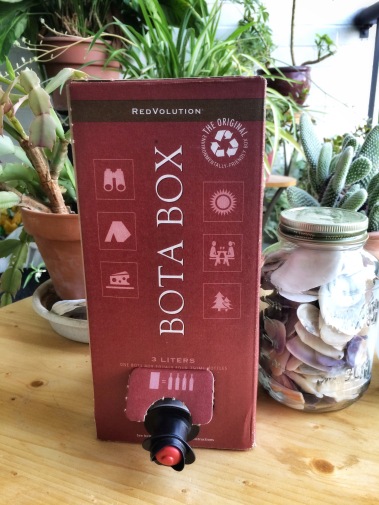 In preparation for the rest of my life, I’ve gone back to school. Starting with this summer semester, I’ve begun course work online from Central New Mexico Community College. This means that, in addition to working full time, I now come home and spend three to four hours doing homework every night. While it also explains why I haven’t been writing very many wine reviews lately, it does not mean that I haven’t been enjoying my fair share of wine and keeping notes in my special wine journal for future blog posts.

One of my recent favorites is RedVolution from Bota Box.

Upon realizing that the wine budget was rivaling my car payment, I knew I had to find a more sustainable alternative.

When you buy a bottle of wine, a good percentage of the price is actually the bottle itself, the label and the cork. In other words, you’re paying for packaging, not wine.

Box wine, on the other hand, does not come in a bottle that looks sophisticated sitting on the coffee table for one night, but the difference is that it sits on the kitchen counter for at least a week. This 3 liter box is equivalent in volume to four 750ml (regular size) bottles of wine and costs about $20. Say what you will but there is no $5 bottle of wine that is going to rival the yumminess of RedVolution so, you know, math wins.

RedVolution is one of those ideal red blends. They don’t say what’s in it but it’s very smooth and exhibits a subtle smoky quality. The box says cherries and cocoa and I would agree with that claim. I’ve never gotten a headache from RedVolution and even though it’s packs a wallop at 13.5% alcohol, it doesn’t hit me very hard. The perfect end to a 14+ hour day of dealing with stressful idiots and then trying to teach myself to be smart is a delicious and calming glass of RedVolution.